Yep! There are many reasons to complain and yet … 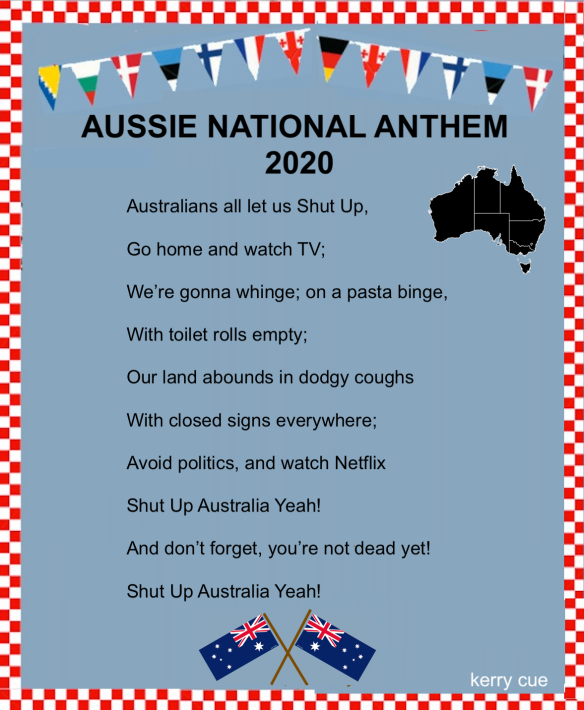 From Charming and Colliding Blog

Ministers of Education have been alarmed in the past to discover Australian High School Students know very little about the history of this country. The following essay by Ashlee M, Year 8, Coolathanu High is believed to be included in some bureaucratic report somewhere.

Australia is a large incontinent that lies in the Specific Ocean except for Tasmania which doesn’t know where it is. Australia is very hot because the Topic of Popracorn is in Queensland somewhere, which means Queenslanders are sweaty and can grow topical plants in their ears. But the most important topic is the topic of Cancer because if youse get sunburnt, Omigod, ya gonna die.

Full Article: Captain Hook and the History of Oz

I grew up in Kyneton next door to the CFA, the volunteers who risk their lives for the community, fighting fires in, often, 40°+ (104F°+) heat

We Aussies aren’t big flag-wavers … but, for so many reasons, the CFA makes me proud to be an Australian.

It is 100 years since the end of WW1. That seems like a long time ago. When I explain that my grandfather’s elder brother  Michael O’Donnell was killed in that war at Bullecourt, France in 1917, the story loses the dust of history and sounds closer to us.

This is the story about a young man who was Court Martialed 3 times, held with enemy prisoners and  finally allowed to go to war following a Senate Inquiry.

It is also a story about duty, loyalty and honour and how much we Aussies have changed today. 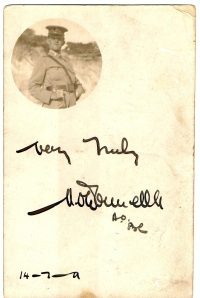 The sound that distinguishes Anzac Day from others is the bugle call. The solitary call of the Last Post reverberates down the generations as a mournful cry for the loss of war.

In the First World War it was the loss of so many young lives and for what? A toehold on some peninsula, a futile charge into no man’s land? The loss swept into every Australian household. Mothers lost their sons.

Young women lost brothers, boyfriends, lovers, husbands. And for fathers, adding to the pain of loss, was the bitter aftertaste of guilt summarised so succinctly by Rudyard Kipling, who lost his own son in that war:

“If any question why we died/Tell them, because our fathers lied.”

Yet the generation of Australians who served in the First World War had qualities we no longer possess and this is our loss.

Shock! Horror! Outrage!
The NSW Australia Day Council is threatening to publish the Rules of BACKYARD CRICKET on Australia Day, 2018. (Go to: Backyard cricket battle over call for same rules for all, Emily Ritchie, The Australian, 13 JAN, 2018.) 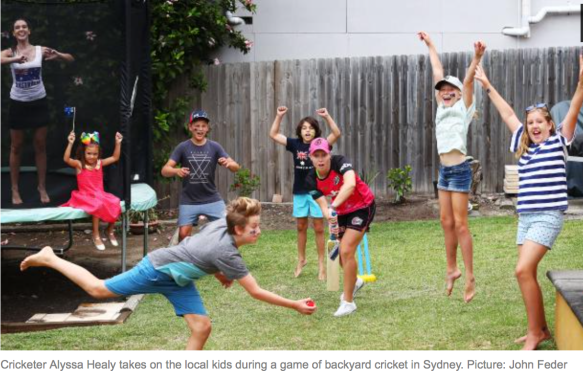 There are no rules. That’s the point.

I wrote a LETTER TO ALLAN BORDER in 1988. This comic story about the crazy make-them-up-as-you-go rules of Backyard Cricket was published in The Age, SMH etc.

Ian (Macca) McNamara read out the letter on Australia All Over, ABC.

LISTEN to Macca read: A LETTER TO ALLAN BORDER (above)

My daughter found a video marked ‘Kerry. Don’t tape over’ in my mother’s handwriting at the back of a cupboard last week. Sadly, my mother has been dead for over 20 years. We don’t have a VCR player anymore. My daughter bought one for $20 on Gumtree.

The tape contained TV interviews. Kerry with Ray Martin. Kerry with Steve Vizard. etc. I was astounded to see my younger SELF of 30 years ago. I was in my thirties. (The pic above is 10 years old). All I can remember was hating going on TV. I was SELF CRITICAL of everything. My looks. What I said. What I didn’t say.

Keep in mind this was live TV. You are often told what to wear, what to say, what not to say. And there was the audience too. I wanted to please them all, the anonymous THEY. But don’t we all do that all too often. Shouldn’t we ask ourselves sometimes ‘who exactly am I trying to please here?’

And why? Why did I care about THEM? Why didn’t I just please myself? See for yourself:

When you arrived at the old Channel 9 studios in Bendigo St, Richmond, and walked into reception on your way to a morning show interview or live cross, the receptionist would ring through to some studio lackey announcing ‘the talent’s here’. That’s how much the TV studio staff cared about performers. No name. Just THE TALENT. The carpark had a sign that read ‘PARKING FOR STAFF AND TALENT’.

I always imagined the Channel 9 carpark teaming of jugglers, violinists and ballerinas on their way to and from some show.

Working for newspapers, publishers and radio shows I did not come under pressure of having to worry about the ANONYMOUS THEY. This pressure to perform or conform only applied to TV, a visual media. But we are all in the visual (social) media today in some form or other.

A friend once commented to me that being a soldier is just a job. Moreoever, they know the risks involved when they enlist, so why do we make such a fuss on ANZAC DAY?

Being an accountant is a job, a perfectly resonable job, but accountants do not risk their lives, they do not get shot at for simply turning up for work. Being a member of the Armed Services is NOT JUST A JOB. And here is the reason why:

A TRIBUTE FOR ANZAC DAY

I am an Australian soldier. I fought in the First World War. We called this war the Great War. We couldn’t believe there’d be another. Britain was at war. So we were too. That’s how it was, then, in Australia.

Thousands of us lads put down farm and other tools and joined up for the adventure, for a lark. But it was no lark. Gallipoli was our baptism into the bloodletting insanity of this war. We lost mates. Those lads of just 19 and 20 were buried where they fell on the sands of Damascus and in the fields of Villers-Bretonneux. But the insanity persisted. We lived misery in the trenches. When the insane call came to go over the top into No-man’s land, we went.

Later, on the first ANZAC Day 4,000 of us marched through the Domain in Sydney. But the crowd did not treat us like conquering heroes. There were no cheers, just a few handclaps. They stood in silent awe of the spirit of the ANZACS. 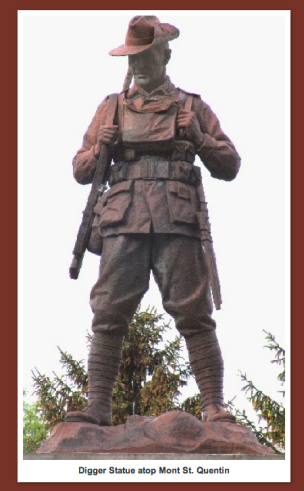 I am an Australian soldier. I fought in the Second World War. I went to the Middle East. At Damascus and El Alamein we fought in the merciless glare of the desert sun. We were cut off at Tobruk, undermanned and under supplied, we dug in and held on. The Germans called us the ‘Rats of Tobruk’.

Then Japan attacked Pearl Harbour. And suddenly the war front was heading for Australia. Singapore fell. We became prisoners of war and saw some of our mates, young boys, tortured, beaten, starved and beheaded. We survived. Just.

But the fight for Australia had begun. Weary and diseased, we fought the Japs step by slippery step back along the treacherous paths of the Kokoda Trail in New Guinea. And we stopped them getting to Port Morseby. We stopped them getting a foothold in New Guinea and clear access to Australia. Then as the tides of war turned we fought them inch by bloody inch back through the Pacific island jungles to Japan.

But don’t call us heroes, we’re just ordinary blokes who put on a uniform. We fought and some of us died for Australia.

I am an Australia soldier. I fought in Vietnam. A conscript, I was plucked off the street at 18, put in a uniform and sent to the jungle to fight a cause that I didn’t understand in a war that had no front. This war was not like others. We couldn’t see the enemy. Mates died at Long Tan for what? Back home I was spat on in the street. I was angry and frustrated. But I understand now.

I may not always respect what the government does, but I respect their right to do it. That’s democracy. In 1966, Australians voted overwhelmingly in favour of the war. It was all the way with LBJ.

I am an Australian soldier. I have represented Australia in peacekeeping forces in Zimbabwe, Cambodia, Somalia, Iraq, Rwanda, Bougainville and East Timor. I have fought in Afghanistan. I’ve seen countries where governments are changed by machete or Kalashnikov. And it makes me thankful to be Australian. We can change government without the loss of blood. For all its flaws, our democracy works.

My first book was published in 1983 so – add old timers accent – ‘I been ’round this here old place a long time’. The following event is one of the oddest experiences I had in the world of publishing. That is, if you don’t count, being ‘heckled’ by Barbar The Elephant at the Sydeny Writers’ Festival. 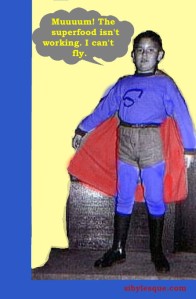 You may think I’m merely a mild mannered reporter. But, dear reader, I have fought a ‘superhero’ battle. It all began years ago when I wrote a book for kids titled ‘How to save the world before breakfast’. Subtitle ‘A magazine for young superheroes’. To cut a long story super-short, D.C. Comics kindly explained to my little Aussie publisher that they owned the word ‘super heroes’ and we could, to cut through the legal jargon, bugger off.

I immediately imagined the D.C Comics legal team was comprised of escapees from Krypton who, having discovered a loophole in the this-planet-will-explode contract,  had escaped early in rockets and re-established themselves on the planet Legalon producing a race of Super Lawyers who were taking over our Solar System by suing the pants off every creature in the Universe.

Suffice to say, a barrister-type friend who, in his legal regalia in a high-wind did look quite Batmanish, pointed out that D. C. Comics were right. They owned the words ‘super heroes’. It was not a copyright matter. It’s a trademark!!!! So my publisher pulped the first book cover and I changed the subtitle to ‘The hilarious first addition of the Superkids Magazine’. And so the book, which gave advice on ‘How to select the right cape for you’ and ‘How to keep your hair neat in a cyclone’, was eventually published.

kerrycue
Create a free website or blog at WordPress.com.