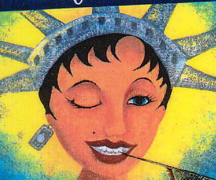 You can’t stop me. I’ve thought about it and its over. I’m going to divorce Paul McCartney. It’s been a long term relationship. Me and Paul go way back. When The Beatles first stepped off the plane onto the tarmac in Australia it was love at first sight. It had to be by sight because I couldn’t hear a thing as my friend Lynette spent the entire broadcast screaming at the black and white tellie. We were both in Year 8. She loved Ringo.

But it’s over with me and Paul. I’m talking about the end of a 44 year relationship. That’s a better track record than some of his other relationships. It was intense too. I had all the Beatles Albums. They were in my head, actually, because we couldn’t afford records. I can hum the entire Beatles collection. You try and hum Maxwell Silver Hammer. It’s not easy. I was so dedicated to Paul I was even prepared, if I had twins, to name them Ebony and Ivory. Now that we’re breaking up I think I deserve something. I wouldn’t ask for much, maybe, a masseuse for my dog and a small Lear Jet. There will not be custody issues. I’ll return those bootleg videos of The Beatles recorded live, obviously, by a drunk in a swivel chair.