This article circulated for 5 or 6 years on the internet. Engineers, it seems, don’t get much press! I wrote it 15 years ago, but it still has currency. 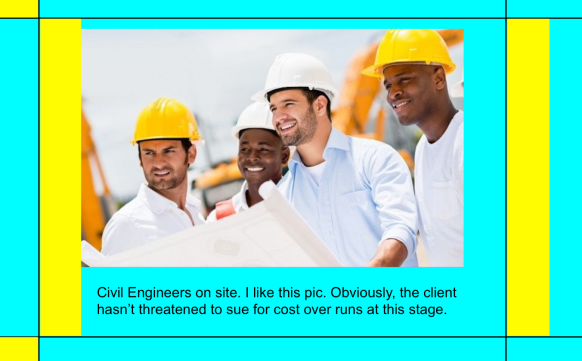 It has been ordained by the gods of television that all jobs and/or careers shall be seen now and again in a positive light on TV. Doctors, cops, lawyers, nurses, and even vets enjoy their moments of digital glory. Chefs, landscape gardeners, carpenters, and even real estate agents are now pin-up boys. The girls in these shows are hot. Any girl who can look good and knock up a coffee table that a bloke can plonk his feet on has to be a babe. There have been intense pathologists (McCallum for one), gorgeous undertakers (in Six Feet Under), legendary lover-boy/pizza delivery boyos (in Pizza Live) and cute butchers dancing in an ad like Hare Krishnas for carnivores.

Recently, TV even gave us a sexy accountant. In Loot, Jason Donovan played an edgy Forensic Accountant who tracks down Mafia bosses. Every job/career gets some good PR on TV except one group. Engineers. Engineers have long endured a bad press. There are jokes about engineers. Here is one. How do you torture an engineer? Tie him to a chair and fold a map incorrectly in front of him. There are Engineer Quizzes. Are You an Engineer? You are if you own one or more white sleeved shirts if your chequebook balances if you’ve ever tried to repair a $5 radio and if you have a neatly sorted collection of nuts and bolts in the garage. There is even a comic strip about an engineer. Dilbert’s an electrical engineer. He loves his computer more than people. And has the social skills of a mouse pad. Moreover, the public image of an engineer is a tragic cross between a computer nerd and a trainspotter.

Is this fair? I’m in a good position to comment. I have studied engineering. I hang out with engineers. I married one. And it is true that engineers of the male variety suffer a mental disturbance that has bestowed on them excessively ordered minds. A straight line is a thing of beauty to an engineer, a bowling green a well-designed garden. They are dedicated to the horizontal and vertical. This has caused strife at our place. We live on a steep slope. Workers asked me if I wanted our new pullout clothesline leveled-off or leaning down the hill. ‘Just whack it down the hill’ I replied. This apparently defied all laws of the universe. It caused lasting pain to HRH (His Royal Horizontalness). He moaned. He groaned. ‘But the towels hang straight’ I encouraged. He eventually took to it with a hacksaw.

Engineers can calculate in their heads how many lights were left on and for how long just looking at the electricity bill. They suffer an urge to know what lies beneath and pull things like the hairdryer apart just when you want to use it. They like specifications. And read all the technical information on appliance advertisements insisting that the X50-100 is much better than the RP90 so they should buy one. Our dog conformed to a list of specifications. Small. No hair loss. Non-aggressive. Engineers understand technology possibly more than people. HRH often looks at me as if I need to be rebooted to knock out the glitches in my program. But engineers aren’t computer geeks. There are a few. But engineers end up under bridges, inside reactor vessels and inspecting pipelines in Alaska. They’re more a cross between a flawed human-calculator like Dustan Hoffman’s ‘Rain Man’ and Indiana Jones. An engineer friend of HRH was recently blown up in a car bomb in Iraq. So they’re not nerdy.

Then for one brief and dizzy moment, I thought engineers were about to get their few moments of glory on TV. The ABC is currently screening the ‘Seven Wonders of the Industrial World’. Would these programs portray the engineer as a hero? Will engineers, at last, be seen as sexy? In these shows, the engineer is portrayed as an obsessive mathematical genius stumbling from one organisational disaster to the next. Each project is a bureaucratic nightmare. It involves cost overruns, government intervention, investor panic, dodgy subcontractors, worker rebellion and safety issues. In fact, each of the Seven Wonders of the Industrial World sounds like any major project in modern times.

Sadly, the show missed the significance of engineers. Engineers may be nuts, but not one pipeline, powerline, car or dam; not one skyscraper, bus, house, train line or highway; not one bridge, footy stadium, sound system, TV station or power station in this city would exist without them.

Kerry Cue is a humorist, journalist, mathematician, and author. You can find more of her writing on her blog. Her latest book is a crime novel, Target 91, Penmore Press, Tucson, AZ (2019)